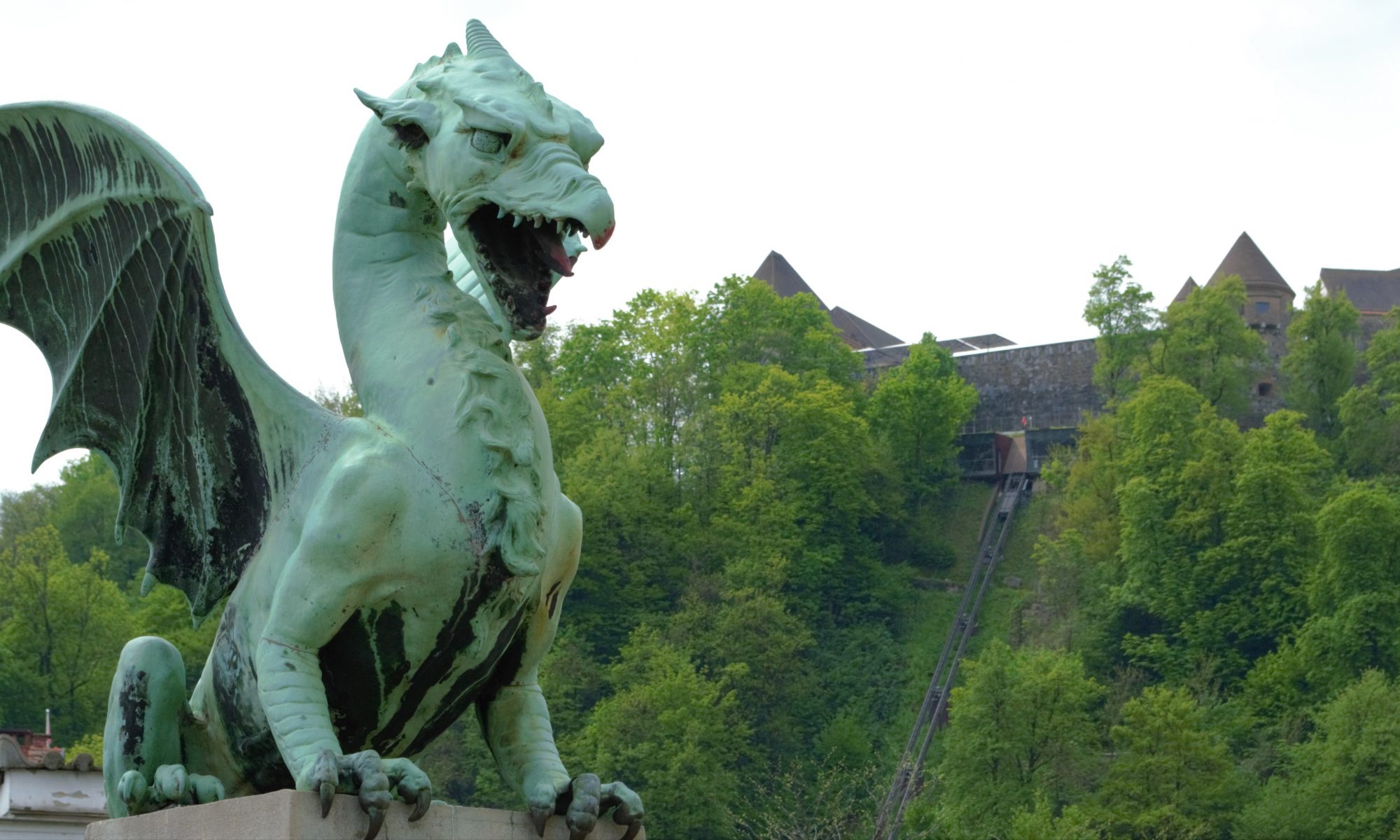 If you haven’t had the chance to read about our stay in Tolmin, you can read all about it here.

We left Tolmin via the same means by which we arrived, getting a bus back to Most na Soci and a train through Bled. This time though we carried on to the end of the line at Jesenice before changing platforms and boarding the train heading for Ljubljana.We had been in Ljubljana before, very briefly, on our multi-stage trip to Bled and it hadn’t really left the best impression. The area around the bus and train station is slightly run down and, as the sky was covered in the first cloud we had seen for a while, the whole place seemed a bit grey.
In the meantime, we’d had conversations with fellow travellers who all raved about the place so we arrived back there, excited to see what was behind the bleak façade.

Fortunately, the old adage that you should never judge a book by it’s bus station proved to be true and what we found was a vibrant and truly beautiful city with a relaxed vibe and friendly people.

After settling down in our hostel and revelling in the presence of actual, functional cooking equipment, we tool a short walk around the immediate area to acquaint ourselves with it before we headed into the city proper the next day. Despite only being about 2km from the city centre, it felt like we were wandering around a small, country village. The roads were all lined with cherry trees and everyone seemed to be out, tending to their garden or enjoying the evening sunshine. It felt a million miles away from the usual image of a European capital city.

After a good night’s sleep, we set out for the walk into the city with the aim of discovering what it was that made everyone who’d been wax lyrical about the place. As soon as you enter the old town on the banks of the Ljubljanica river, you understand.

The architecture is visually stunning, with one side of the river lined by handsome embankments and the other lined with the tables of riverside restaurants and cafes, packed with locals enjoying their morning coffee.

After a tour around the streets, we took a walk up the hill that overlooks the city to the Ljubljana castle in order to take in some of the views and enjoy a spot of lunch before setting off back towards the hostel.
On our journey back, we happened upon one of the quirkier attractions that Ljubljana has to offer, The Museum of Illusions. Just off one of the main squares, this compendium of all things mind-boggling houses three floors of optical illusions and gives you the background as to why our brains trip up when faced with such things. A lot of the exhibits are interactive and provide a great photo opportunity. It’s definitely well worth a visit.

That evening, Liverpool were playing Roma in the first leg of the Champions league semi-finals and we had decided to go out and watch the match at the self-proclaimed ‘best sports bar in Slovenia’, Lepa Zoga. After a claim like that, it could only be a let down but amazingly, it lived up to it’s lofty boasts. The place was absolutely packed out. It was standing room only inside and out as the bar seemed to have been the victim of some sort of scouse invasion. There were hundreds of Liverpool fans, all there to enjoy the game  and enjoy it they did. By the end, Cath was so taken away on the wave of Liverpudlian euphoria that she was up on her feet and cheering with the rest of them!

After the excitement of the night before, the next day was to be a slightly calmer affair as we spent the day exploring Tivoli Park. The park is a huge area on the outskirts of the city which houses a zoo, botanical gardens, several grand buildings and a vast wooden area full of hidden trails and local wildlife.

After a few hours spent gallivanting in the woods, we stumbled across an old abandoned building. We later discovered that it was the remains of the old Bellevue, a luxury hotel which having been gutted by fire, had fallen into disrepair and been forgotten about.
We spent a while exploring until we heard some unexplained banging from inside and swiftly legged it back to civilisation.

On our last day in Ljubljana we opted for a trip to the little known enclave of Metalkova. Situated very close to the city centre, this is an alternative, self-governing community housed in the remains of an old army base.
From humble begins as a glorified squat, Metalkova has become somewhat of an outdoor art exhibit and music venue and is an amazing place to have a stroll.

That evening we got an ice cream and had one last walk around this glorious city that we had very quickly fallen in love with.
Next stop – Plitvice National Park in Croatia. A place that is probably one of the most Instagram’d in the world and somewhere we had always dreamed of going.