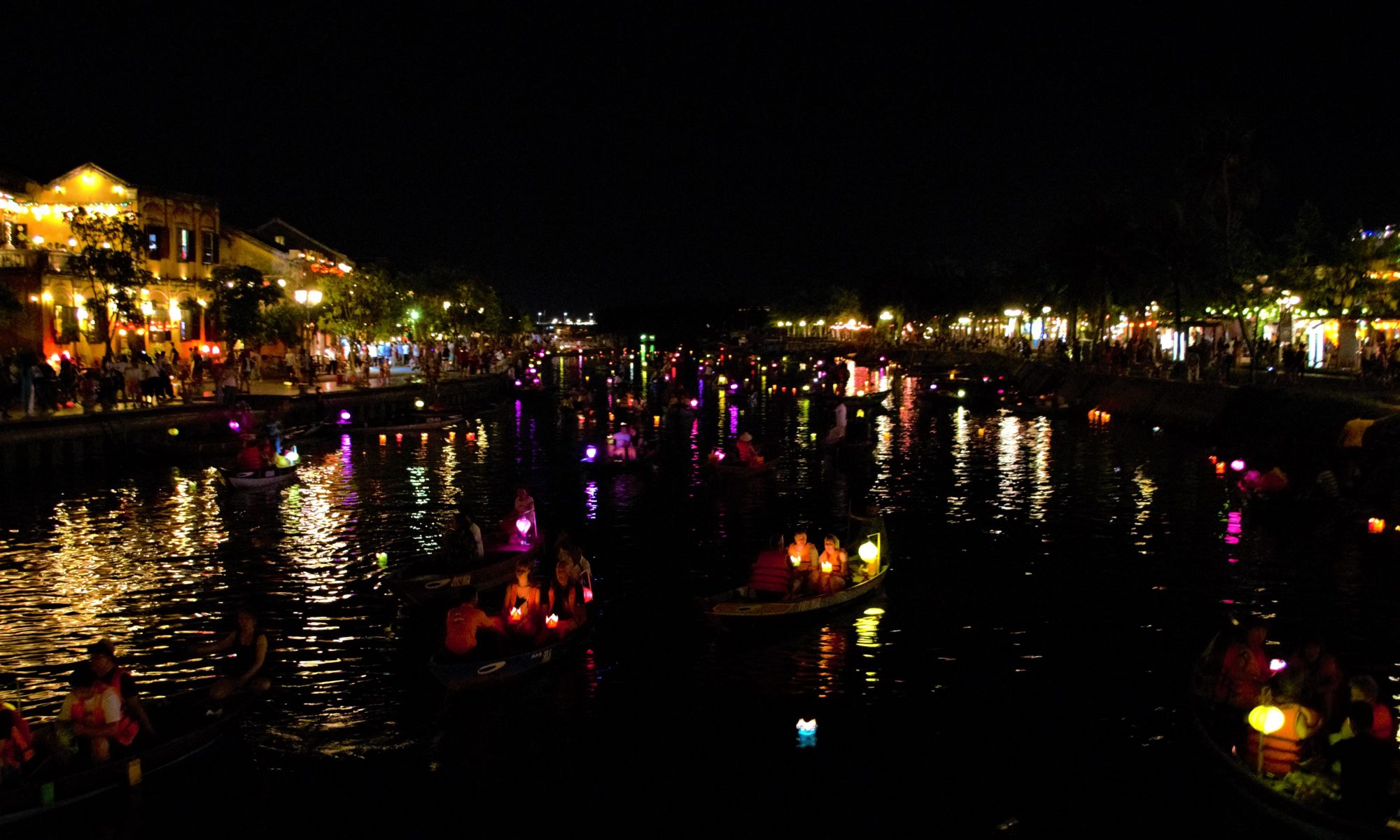 The next stops on our journey south through Vietnam would be the central cities of Hue and Hoi An. Both are beautiful (especially Hoi An), but any readers hungry for photographs will have to wait a little longer. We’re currently marooned on an island in the South China Sea and have very limited access to the internet. That will mean that the next couple of posts will be text only, but I do pledge to revisit them and add some images when that becomes an option. Anyway, on to our continuing adventures in Vietnam…First up was Hue, the seat of Vietnamese power until 1945 and site of some of the bloodiest battles during the Vietnam War.

Arriving in mid-afternoon, we were soon wandering around and getting our bearings for the days to come. Hue sits on the banks of the Perfume River, so called because of the fragrant orchard leaves that drop into it’s waters during autumn, and this vast waterway soon becomes a good reference point as you attempt to navigate your way around.

Much of Hue is modern, with an almost Western feel, but the most interesting parts are hidden behind the walls and moat of the old city with the citadel of the Forbidden Purple City at it’s heart.

Given our limited time, we opted to book a tour of all the main sights for the following day. That way, we could get to know the city a bit before visiting all the major tourist traps. In South East Asia, the best way of getting to know a place is often to head towards the night market, partly because that’s where all the food is and partly because it gives you an opportunity to mingle with the locals. With this in mind, we ambled about until 6pm, at which point we headed for the embankment under the Trang Tien Bridge (designed by Gustave Eiffel, of Parisian tower fame) to sample some of what Hue had to offer.
What we discovered was the local speciality of Bun Bo Hue, a spicy beef soup with seafood balls (I know…) and cubes of pigs blood. It doesn’t sound great but it was super tasty and ridiculously cheap. Both our meals including drinks came to a total of 90,000 dong which is about £3.

As you move south, away from the river, the tone changes and you enter an area which is entirely given over to tourists. Giant bars pump out loud music despite being totally empty. During the first 5 minutes of walking in this area, we were offered marijuana, cocaine and even opium! This wasn’t the historical city that we’d come for, so we returned to the hostel to prepare for our tour.

Early the next morning, we started our proper exploration of the city. The bus picked us up at 8:30 and we boarded as the only western faces in the group. This meant that the first attraction was us and we were soon centre of attention as our fellow passengers encouraged their children to practice their English on us.
The tour covered most of the main attractions in and around the city. We started at the Forbidden Purple City, former home of the Vietnamese emperors and made our way out from there to a few of the many tombs that house the remains of those emperors. The tombs were gigantic areas of manicured gardens and lakes dotted with buildings, each of which signified a part of the emperors body.
The tour ended in the usual way of being mildly pressured into buying some locally made tat, but we stood firm and our bags remained unburdened by the incense on offer.

The next day were off again, headed for the city of Hoi An. I’d heard a lot about how amazing this place was so we were eager to arrive. We stayed in a hostel slightly out of town and the inauspicious surroundings made me wonder what all the fuss was about. Then we took a walk into the old town and suddenly we understood.
The traditional buildings that line the pedestrianised streets in the centre of town make it easily the most beautiful city that we’d encountered in Asia so far. Everything about it made you feel as though you’d been transported back in time to Hoi An’s heyday, when merchants and traders from all over the world would meet to swap stories and goods.

Almost unbelievably, Hoi An becomes even more stunning by night. The brightly coloured lanterns that hang above the busy streets give them a unique glow which can’t be matched by the neon lit facades of most modern cities.
All of this though is merely the appetizer for the real spectacle of the place, the river. As darkness falls in Hoi An, an army of boats takes to the water. Each one is adorned with a set of vibrantly coloured lanterns which cause the water to glisten and sparkle with a thousand reflected tones in an almost psychedelic manner. There really is nothing like standing at the waters edge, taking in this nightly spectacle.

Hoi An also gave us the opportunity to do something we’d waited a very long time for – have a day on the beach. We’d been in Asia for a long time now and had not even seen a real beach, so this was something that we just couldn’t pass up.
We hired bikes and headed off on the 3 mile journey out to the coast. The trip was relatively uneventful and after 20 minutes we were parked up and enjoying a beautiful sunny day at a pristine stretch of beach. A few hours later, and horribly burnt, we gingerly got back on the bikes and made our way back into town.

Our last night would, once again see us visit a night market. The market here was awash with food vendors of all varieties, including purveyors of a Hoi An delicacy, locally caught grilled frog. Each one was served on a skewer which had been respectfully jammed up it’s bottom. Obviously we were obliged to have a taste. I’m happy to report that frog meat is exactly like chicken so this was nothing like the scorpion fiasco. The worst problem was the lack of size, I could have eaten about 10 of them. It was a fine way to say farewell to a very memorable place.

If you missed our last post about our trip to Phong Nha, you can find it here.