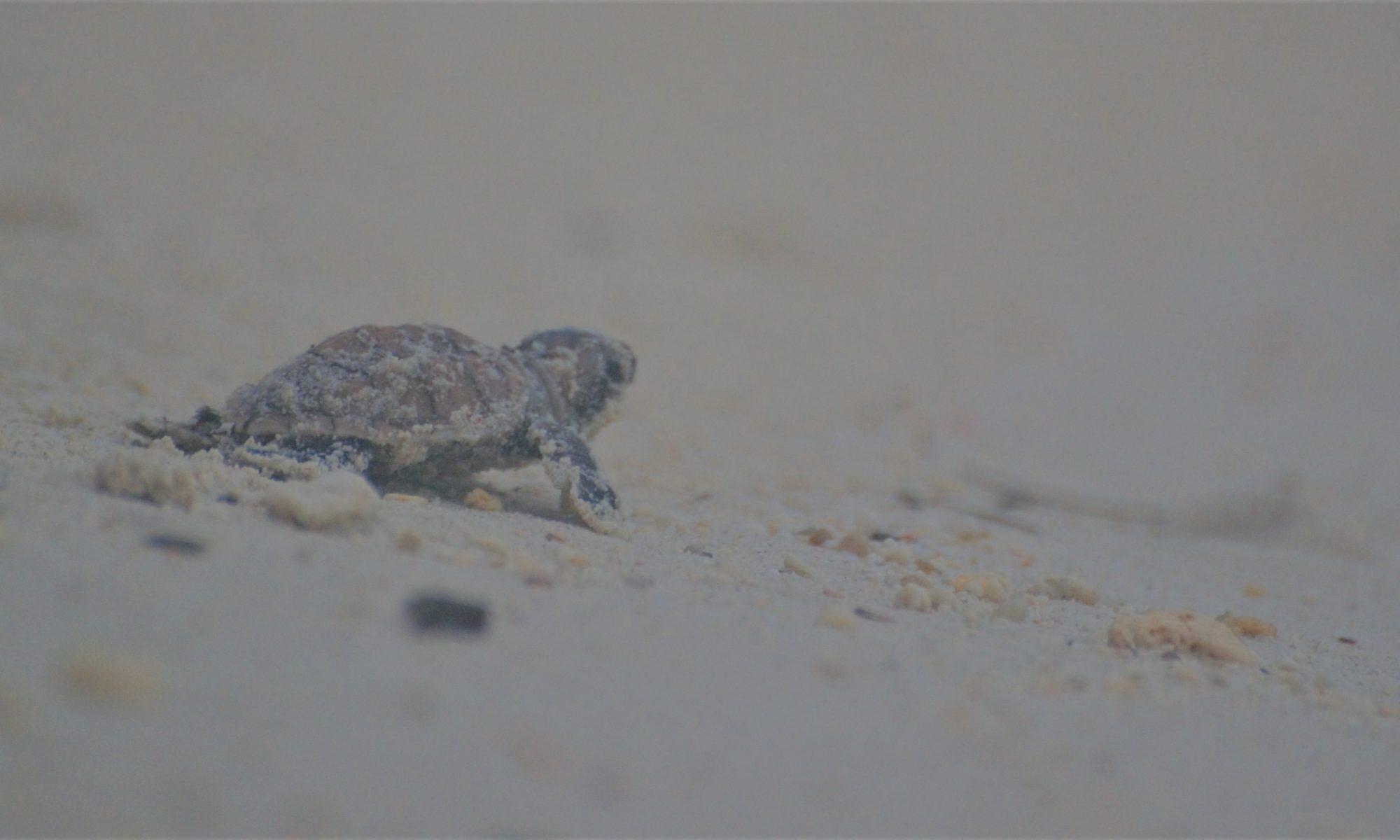 I know, I know… we haven’t posted here for a while. It’s not that we’ve forgotten you and the blog is certainly not over. We’ve had a perfect storm of extreme busy-ness combined with some, less than ideal internet access recently and it’s for that reason that you haven’t heard from us for what seems (to me at least) like months. That is also the reason that I’m going to break chronology for a bit and write about our latest and greatest adventure – our time at Tengah Island Conservation.

First, a bit of background. We always had the idea that we wanted to spend, at least a potion of our time away, doing something to give back to the world that we’re exploring. After a lot of online research, some heated discussion and a very early morning phone interview, we decided that this would come in the form of a month of volunteering at the tiny island of Tengah, just off the Malaysian coast.

This tropical paradise is home to Tengah Island Conservation, a small team of scientists who have tasked themselves with preserving the fragile marine and terrestrial eco-systems of the local area. This band of bespectacled super-heroes could not do it alone though and that is where we enter the picture. Along with a host of other volunteers from all over the world, we would assist the staff in all manner of varied ways and, in doing so, help them achieve their goals and hopefully see some baby turtles along the way.

We arrived at the port ready to board the boat, not really knowing what to expect. We had seen photos of Tengah and it certainly appeared beautiful but we were both nervous about how we’d fit in to a group in which even the other volunteers were all marine biologists. How were we, a couple of IT geeks from Birmingham, going to be of any use to them?

After the short trip to the island, we jumped on to the jetty and began what was to be the highlight of our trip so far.
We were given a warm welcome by everyone there and were soon settling in to our new home, a small dorm block and communal area lovingly dubbed ‘the ranch’. It wasn’t luxury, but it had everything that we needed and would prove more than adequate for our time on the island. An island which, by the way, was a fucking paradise on earth. The beaches, the jungle, the reefs, the sunsets – all of it was like some idyllic dream. You half expected to discover a chocolate waterfall every time you rounded a corner. There would be time to revel in our surrounding later though. First,it was down to work.

Our fears of being regarded as useless extras, milling about in the background of the real action, were soon completely allayed as we dived (literally) straight into the list of tasks that needed to be completed each day. I feel like I need to paint a picture of the huge variety of things that we got up to while on the island so here goes:

Boat Patrol – Early morning patrols came in two varieties, the most exciting being boat patrol. This involved jumping onto (shockingly) a boat and (wait for it) patrolling the neighbouring islands looking for turtle tracks. If you saw any, you’d vacate said boat and leg it up the beach in the hope of discovering a fresh nest of turtle eggs. Over the course of our time, we discovered, dug up and relocated 5 nests between the two of us.

Foot Patrol – The other, less glamourous type of patrol involved circumnavigating the island by foot and then reporting anything of note when you got back. The aim was the same but, as very few turtles choose to nest on Tengah itself, the most exciting thing that we discovered was a big piece of polystyrene. Still, it was noted and then collected later.

Night Patrol – These additional walking patrols took place at 2 hour intervals throughout the night from 9pm to 5am. As opposed to the 7am patrols, these only involved inspecting the nearby beaches and the turtle hatchery. These were always interesting as they were the most likely time to discover hatchlings, mostly though you’d be walking along a deserted beach in the dead of night with only an army of crabs and giant fruit bats for company.

Beach Clean-Up – Basically, you went to a beach and spent two hours picking up rubbish or oil or ghost nets (old fishing equipment) and shaking your head at the disgusting way that humans treat our planet. Honestly, if you want to hate other people even more than you do when you’re stuck in traffic, go pick up bottles that some odious twat has chucked in a river somewhere. In short, we’re all parasites and we need to sort it out before the whole world is buried under 40 feet of your old shoes.

Underwater Clean-Up – Now this one was brilliant fun. It involved diving down onto one of the reefs and hacking away at giant ghost nets that had become entangled on it. Once removed, you could see where the net had killed the corals and, in removing it, you felt you had made a real and direct difference on the health of that area of the reef. We would regularly bring up more than 90kg of net on an hours dive.

Trash Sort – Now don’t get me started again… this job involved two hours of picking through all the crap that we’d found on the clean up tasks and sorting it for recycling. Look, just trust me when I say don’t use straws or disposable lighters, there are a lot of them in the sea right now. The next time a barman gives you a straw, ask for two cocktail sticks and then ram them into his eyeballs.

Fish Survey- Another awesome diving job. This was all about counting various catergories of marine life on the reef in order to get an understanding of the overall health of the area. It was challenging work to spot, identify and note down all of these creatures underwater but we felt like we really contributed to the data collection. Plus… you know…diving.

Tree Nursery – In order to prevent erosion of beaches, it’s very important to have a good mix of plants providing a root-based framework to support the sand. The tree nursery housed seedlings of these coastal plants, all of which need to be potted and watered and generally looked after. It was gardening with a true purpose and Cath absolutely loved it.

Beach Profiling – This was another job where our non-scientific backgrounds could have seen us sidelined but didn’t. This job involved going to set points along a beach and measuring the angle and depth of the beach to gather data to help understand the rate of erosion. It was a long and repetitive job, in blazing sun with no shade but that’s what it takes to capture this very important data.

Coral Nursery – Another underwater job. This meant packing toothbrushes and scouring pads and heading down to scrub algae off of the budding corals on the nursery. It didn’t make for the most exciting of dives but we were doing our bit to try to keep the reef alive and growing for years to come.

Although all of this important work took up most of our time, that doesn’t mean that we weren’t able to enjoy the wonders that the island had to offer. Some of the best moments came while we were not working.
Many of our evenings were spent laid out on the sofas of the ranch, watching movies on the makeshift cinema constructed from the office projector and bedsheet. Others were spent drinking and dancing on the beach as the resort catering manager barbequed up some local delicacies. It didn’t matter what we did, we were doing it with people who had become great friends in a very short space of time.
During the day we snorkelled with baby sharks or took turns jumping off the jetty into the clear blue waters below. There were so many moments and experiences that I could write about here that it would take an age to cover it all. For that reason, I’ll just relay the highlight of our time on the island – the releasing of turtle hatchlings.

These releases – we were involved with 5 during our stay- would often come out of nowhere, in the middle of the night, but were the most rewarding experiences that you could hope to have. They would generally start the same, somebody off on a patrol would run breathlessly back to the ranch and raise the alarm that a group of baby turtles were emerging from their nest. The whole team would jump into action and we’d soon surround the nest and begin moving their tiny bodies into a box, ready for release. The first 10 would be measured and weighed before the remainder were counted and prepared for the first part of their epic journey.

By this time, guests from the resort would have started to congregate around the hatchery and it would be the task for some of the volunteers to attempt to control the crowd and explain the process for release.

Then came the big moment, we would travel en masse down to a safe part of the beach, mark out an area into which the guests were not allowed to tread and get ready to set our freshly hatched turtles on their way.

The box was tipped towards the beach and around 120 little shells, barely bigger than a matchbox would flop and wiggle their way down to the sea. The sight of them making it through the first part of their dangerous voyage was fantastic and you felt a genuine attachment to them as they disappeared under the surf.

As only 1 in a thousand will make it to adulthood, and we saw around 500 hatchlings take their first plunge into their new home, there’s about a 50% chance that one of those that we released will make it to have eggs of their own.  As depressing as the statistics are, it shows the importance of getting as many healthy hatchlings as possible past the first hurdle.

It was fantastic and just one of the many astonishing experiences we had, I could go on all day. During our time on Tengah we helped renovate the conservation centre, we met a sultan, we gave presentations to guests, we quadrupled our number of dives, we saw a dugong, we watched sunsets from a paddleboard, we buried dead turtles, we encountered poisonous snakes, we defended our bins from monitor lizards, we saw amazing thunderstorms, the list is endless.

Our month spent at Tengah Island Conservation with the people on the island was truly, and I don’t use the phrase lightly, life-changing. It left us inspired to try to do more in this field, to volunteer again and to try and make even more of a difference. The friends that we made and the things that we did during that month will live with us forever.
For now, we’re just trying to work out how and when we can go back.