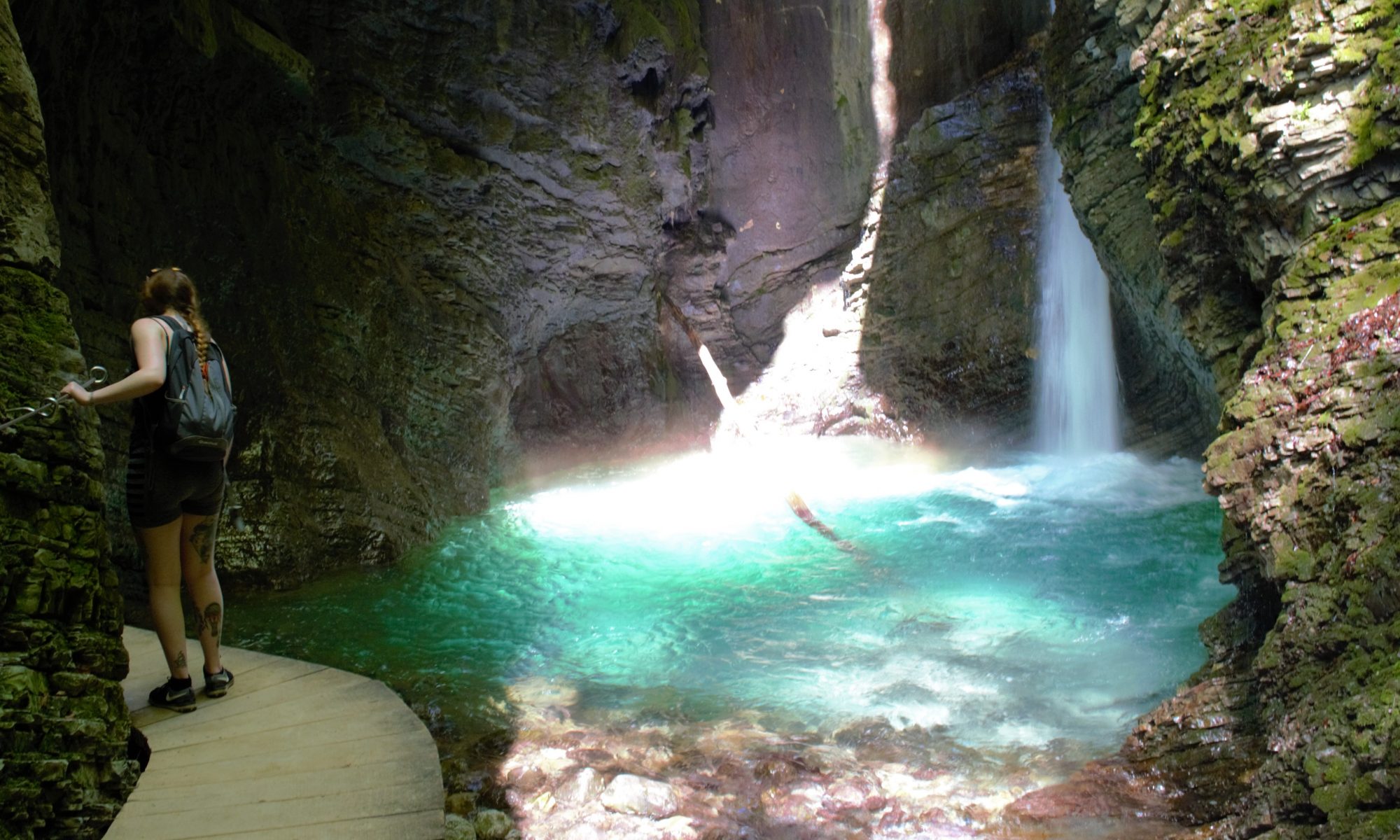 If you’ve missed out on our last blog post about Lake Bled, you can find it here.

The next morning we got a taxi to Bled Jezera train station and set off for Tolmin, a small town hidden among the hills that make up the Soca Valley. The train was not hi-tech or pretty but moved at an impressive rate and was astonishingly cheap.

The train only took us as far as the town of Most na Soci, about 5 miles away, but no sooner had we arrived than we were on a bus and pulling into Tolmin. We were staying in a set of apartments in the centre of town, overlooking a pub and a pizzeria. The fact that these were apartments with shared facilities, furnished with a large communal kitchen and bathroom area, led us to believe that they would have that similar social vibe to our last hostel in Bled. This was not the case.
It wasn’t that the other people that we stayed with weren’t sociable but much more to do with the fact that they didn’t actually exist. In the block of 10 apartments, we were the only ones there during the entirety of our time there. This was fantastic and for the first few hours there we revelled in the huge amount of space that we had. The only downside was the lack of cooking facilities which were limited to one kettle and a microwave. God knows what we would have done if there had been more people staying, I think this whole post would have been dedicated to describing the early symptoms of vitamin deficiency.

As it was, we would have to get creative with our meal choices and we slowly progressed throughout the 4 days from ‘Just add water’pasta to “baked” sweet potato and salad which felt like it deserved a michelin star after that first meal.

Away from the kitchen, we decided that our first day would entail a trip to Tolmin gorge (yes,another gorge), a large and impressive networks of crevices situated just a few kilometres out of Tolmin.
Walking to the gorge, we meandered our way through rolling fields of dandelions, following the course of the Soca river as we went. It’s impossible to mention the river without noting it’s colour which is the most unbelievable shade of turquoise you have ever seen. All the rivers in this region are this way and you can pick them out a mile off as the intensity of the blue is like nothing else. They’re also crystal clear. Both the colour and the clarity are to do with the fact that the waters don’t really encounter soil on their route down into the valley. Instead, they bubble over outcrops of limestone picking up minerals as they go and remaining unsullied by the murky, organic material that ruins the appearance of most large rivers.

The entrance to the gorge doesn’t really look much but as you descend it’s steep sides and approach the crescendo of the waters below, you are met by scenery that cannot fail to impress. We got to the bottom and gazed around us, surrounded on all sides by imposing, vertical cliffs and just centimetres from the rushing, blue waters.

The gorge itself takes about 2 hours to explore fully and involves an arduous 400 step climb to the top, but it’s all absolutely worth it.

During our walk we had been so enamoured with the river that we knew we had to get closer to it. Once back from the gorge we set about booking the next day’s activity – Water Rafting on the Soca.

We woke up the next day excited for what lay ahead and quickly readied ourselves for our adventure. We were picked up from directly outside our apartments in Tolmin by Damien, an irishman who had been living in Slovenia for 9 years and would be our rafting guide for the day. He informed us that we would be the only people going out today and would therefore be getting the VIP, private treatment. After a quick stop to pick up the equipment, the raft and Clem (our driver), we were heading up the valley and to our starting point. We kitted up with wetsuits, flotation vests and some very fetching helmets before dragging the raft down a hillside and to the waters edge and setting off down the river.

I wouldn’t quite call it “white water” but it was pretty rough considering it was both Cath and I’s first experience and it’s safe to say that we loved it. It wasn’t just the rafting, or the fact that we got a little bit of cliff jumping thrown in, but the fact that we were doing it in this environment, surrounded by beautiful mountains and cruising on the stunning Soca river that made it so memorable.

We were on the water for about 2 hours, covering about 15km before we eventually reached the minibus and the end of our trip. Fortunately for us, the drop off point was in the village of Kobarid close to the Italian border and itself the starting point to a picturesque walk that we had been keen on doing. And so, despite being exhausted from frantic paddling, we had a quick bit of lunch and headed out again into the hills.
The focal point of the walk was the Kozjak waterfall, which was approximately 4 km away nestled away within the woods that lined the valley. The walk would take us up a hill to a church and Italian WW1 memorial which afforded us some great views down onto Kobarid, then down into the valley, across an extremely bouncy rope-bridge and past another small waterfall before we reached the main falls.

The Kozjak falls is one of the prettiest you’re ever likely to see. It’s not massive and it’s not the volume of water that makes the impression but it’s situation is second to none. Hidden inside a cave, the water cascades down through a crack in the ceiling which also lets in just enough sunlight to illuminate it and the pool beneath in an almost eerie light.

After struggling through the stifling heat of the afternoon on our way back to Kobarid, we stopped in town for an ice-cream and a drink before meeting up with Clem, who had agreed to give us a lift back to Tolmin as he was heading that way anyway. It seemed a nice enough gesture and it was during this ride that he told us that hitchhiking was a very regular thing in this part of the world. In fact, as you reach the edge of the towns and villages that line the valley, you notice that the roads are lined with youngsters all seeking a lift and the thing is that people will actually stop. Barely a car passes by, as long as they’ve got room, they’ll all slow down and beckon you to hop in. Not only does it put the local taxis out of business but it gives the place a lovely community feel that extends from town to town.

That night we got some rest and decided that, wiped out from the efforts of the day, tomorrow would be a day of organisation and relaxation before starting the final leg of our journey in Slovenia, the capital city of Ljubljana.