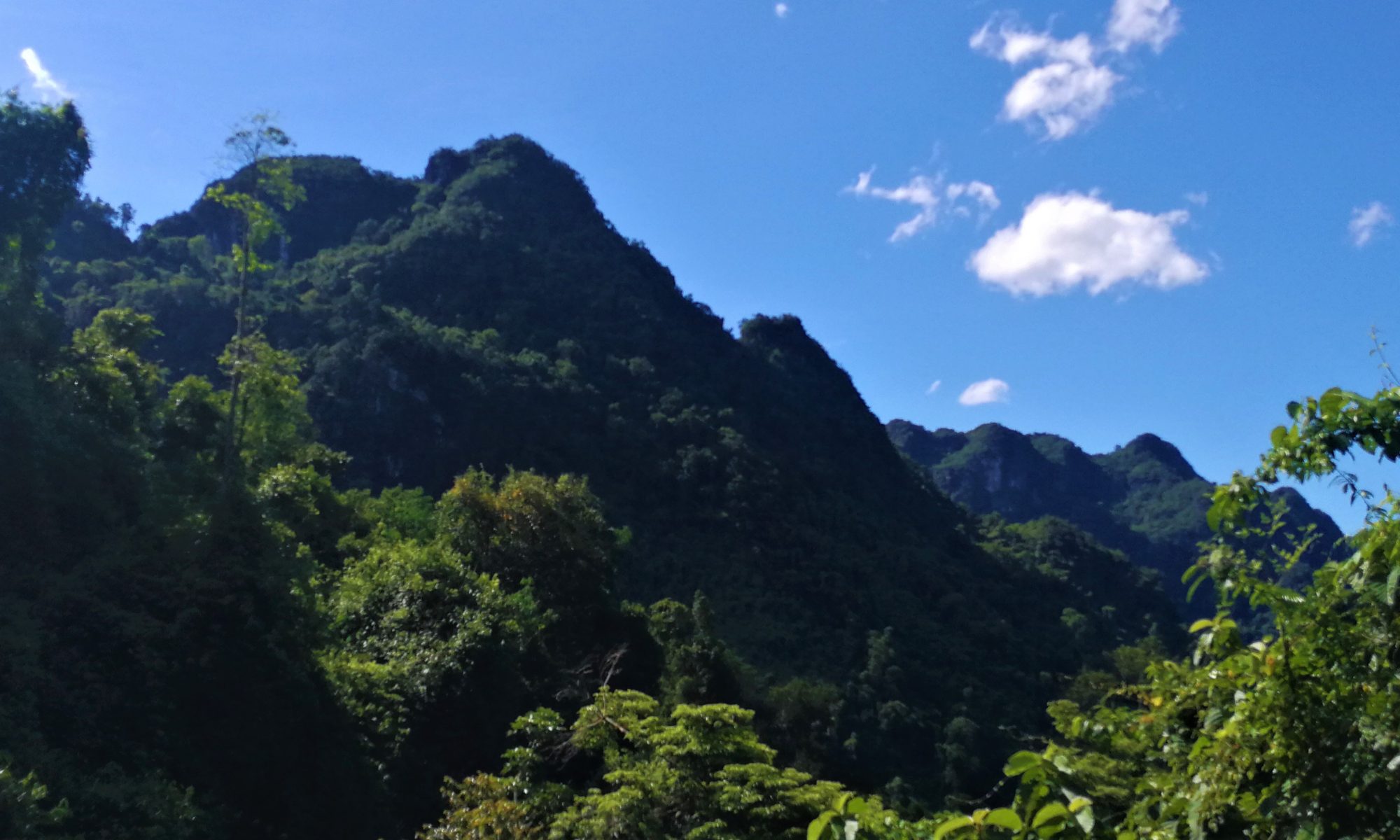 After a long day of waiting, we finally boarded the night bus for Phong Nha. The journey was a painful 7 hours long and had us arriving in Phong Nha town at 4am, possibly the most inconvienient time to arrive anywhere. Fortunately for us we were staying at the Amanda Hotel, home of the the nicest and most accomodating host in Vietnam.

As we pulled into the deserted town centre and located our bags, we were met with the smiling face of ??? who had come to collect us and ferry us to our waiting room. Upon arrival at the hotel, we were given a drink, the keys to our room and the promise that, whatever time we awoke the next day, breakfast would be provided. Can you imagine if you rocked up at any other hotel and asked to check-in 10 hours early? They’d laugh you out of the building and remind you that you weren’t to use any of the facilities until you were an official guest. This guy had actually come to get us at 4 in the morning and then given us half a night free!

When we finally did get up the next day, we were given a giant omelette each and then provided with a great list of recommendations of what to do with our time while we were there. First up, we would rent a moped and visit two of the lesser known attractions in the area – the botanical gardens and the ‘Duck Stop’.
The first highlight was the ride itself. The roads around Phong Nha are almost deserted and as you ride, you are surrounded by some spectacular scenery such that only the fear of having to pick your eyes up off the road prevents you from taking your eyes off the road. The winding journey through hills on the way to the botanical gardens has to rank as one of the most impressive that we’ve been on so far.

Arriving at the botanical gardens, we paid the entrance fee and went inside. Calling it a botanical gardens is actually a complete falsehood. It’s really a walkway through the dense jungle of the national park, dotted with swim-holes and waterfalls that look like they came straight out of a travel brochure. We dove straight into the first swim-hole that we came across and the feeling of being out there in the wilderness, with butterflies and dragonflies flitting around us as we swam was truly astounding.

We continued on through the undergrowth, spotting a whole host of weird and wonderful insects along the way, to find an even better location for a swim at the foot of a waterfall.

Having cooled off in the fresh waters we climbed the side of the waterfall to a great viewpoint that looked back down the valley through which we had just walked.

On the way back round to the exit, we encountered even more creatures, including a couple of monkeys, a small burrow filled with snake eggs and a puppy who was very helpful in untying my shoelaces as I walked.

It was now time for something altogether different as we once again straddled the bike and headed off to the ‘Duck Stop’.
The ‘Duck Stop’ is an odd little place that is part duck farm and part restaurant. We’d heard about it from a few of our fellow travellers and it soon became a must visit during our time in Phong Nha.

After a short ride, we pulled down a ridiculously bumpy dirt road and were soon parking up in a tiny car park. As soon as we’d stopped, a group of small children came running out to greet us. They took us inside and sat us down, even getting us drinks! They all spoke amazingly good English and were very entertaining as they talked to us, eventually stealing our camera to take photos of each other.

Once our order for lunch had been taken, one of the adults came over and asked if we’d like to go and meet the ducks. Of course, we accepted and followed him the short distance out to their pen.
Finding about 50 ducks, we were led inside and set about getting to know them in a series of amusing ways. First we were running around, dropping food and getting the ducks to chase us. Then we had to hold the food in our bare feet and let the ducks mercilessly peck at our toes with their bills. This tickled unbearably, it was all we could do not to kick the ducks away.

Being attacked by ducks is hungry work and we wandered back to the restaurant where a filling meal of tasty Banh Xeo was waiting for us.

That night was very relaxed as the previous night’s travel caught up with us. We needed our rest as the next day would be used to explore the main attraction of the Phong Nha National Park – it’s caves.
There are a huge number of caves hidden among the jagged landscape of Phong Nha including the biggest in the world, the gigantic but hard to reach, Son Doong Cave. We would have to be content visiting two of the easier to access caves in the park, namely Paradise Cave and Dark Cave.

First, we rode out to Paradise Cave, taking in the scenery as we went. The ride took about 45 minutes followed by a mile long walk through the forest and finally, a 200m climb up some stairs to the cave entrance.
Instantly, upon entering the cave via a set of wooden steps, you are struck by it’s immense size. It is just unimaginably big. Although visitors are only allowed into the first kilometre of it, the cave winds on for a staggering 31 km into the earth.

All around you as you walk through are huge stalagmites/tites, and strange, twisted rock formations that look almost as if they were sculpted by humans. It’s an impressive place to be but it’s ruined. As is the case with so many attractions, there are just too many people there. Everywhere you walk, you’re hustled and bumped into by swarms of tourists. It all proved too much and by the end we were virtually running to get out of the place.

As we set off for the Dark Cave, we were hoping for a very different experience. Thankfully, we got it.
A visit to the Dark Cave is less about the cave itself and more about the activities that surround it. No sooner have you arrived than you are strapped into a harness and zooming across a lake on a zip-line, the only way to access the cave itself. It’s a breathless start as you are then required to swim the last stretch before climbing up onto the platform and making your way into the cave.

As the name should indicate, the inside of the cave is pitch black. As you turn a few corners and head deeper, the light from the mouth of the cave peters out and you are engulfed in absolute darkness. Fortunately, you are given headlamps which illuminate a small portion of the thing you’re just about to trip over. The highlight of your journey in the cave comes as you reach a chamber that is full of thick, gooey mud. Never ones to turn down a good mud bath, we dove right in and were soon covered in the stuff form head to toe.

The fun’s not over once you’re out of the cave either. After kayaking back to the other side of the lake, we climbed up to another set of zip-lines. Whereas normally, the aim of a zip-line is to stay attached, the aim of this one was to catapult you into the water from a great height. We rode these ones again and again until, sick of nearly drowning, we made our way to the changing rooms.

As we readied our selves to get some well-earned food, we made sure we had everything and, bike key in hand, set off towards the on-site restaurant. Unfortunately, they had now stopped doing food and so we turned back and made our way to the moped. As we arrived, I suddenly realised that there was nothing in my hand and started to frantically paw at my pockets. Again, nothing.
I couldn’t believe it, even for me this was a new level of clumsiness. In the 30 metre walk I had somehow managed to lose the bike keys. Remember, this was just a few days after losing the bike, so this was an even more unwelcome turn of events.

We paced the short distance that we had covered, scanning every inch of the floor for the elusive keys. There was nothing. No keys, not even any money to act as a consolation. As a last act, I offered to throw myself into the lake but Cath suggested that before we resort to suicide, we should go and ask at the restaurant. I thought this was ridiculous as we were only there for a few seconds but off she went to ask while I prepared my final goodbyes.
Moments before I launched into the unknown, Cath came running back with a big smile on her face. She had the keys!
Someone had handed them in at the restaurant. I must have been so disappointed at the lack of food that I just dropped them to the floor in despair. Once again, we were saved the loss of a massive deposit.

We rode back to town with giant, silly grins on our faces and finally made it to food. That would be our last night in Phong Nha as we had another early bus the following day as we journeyed down to our next destination – the city of Hue.

If you missed our last blog post, you can catch up here.