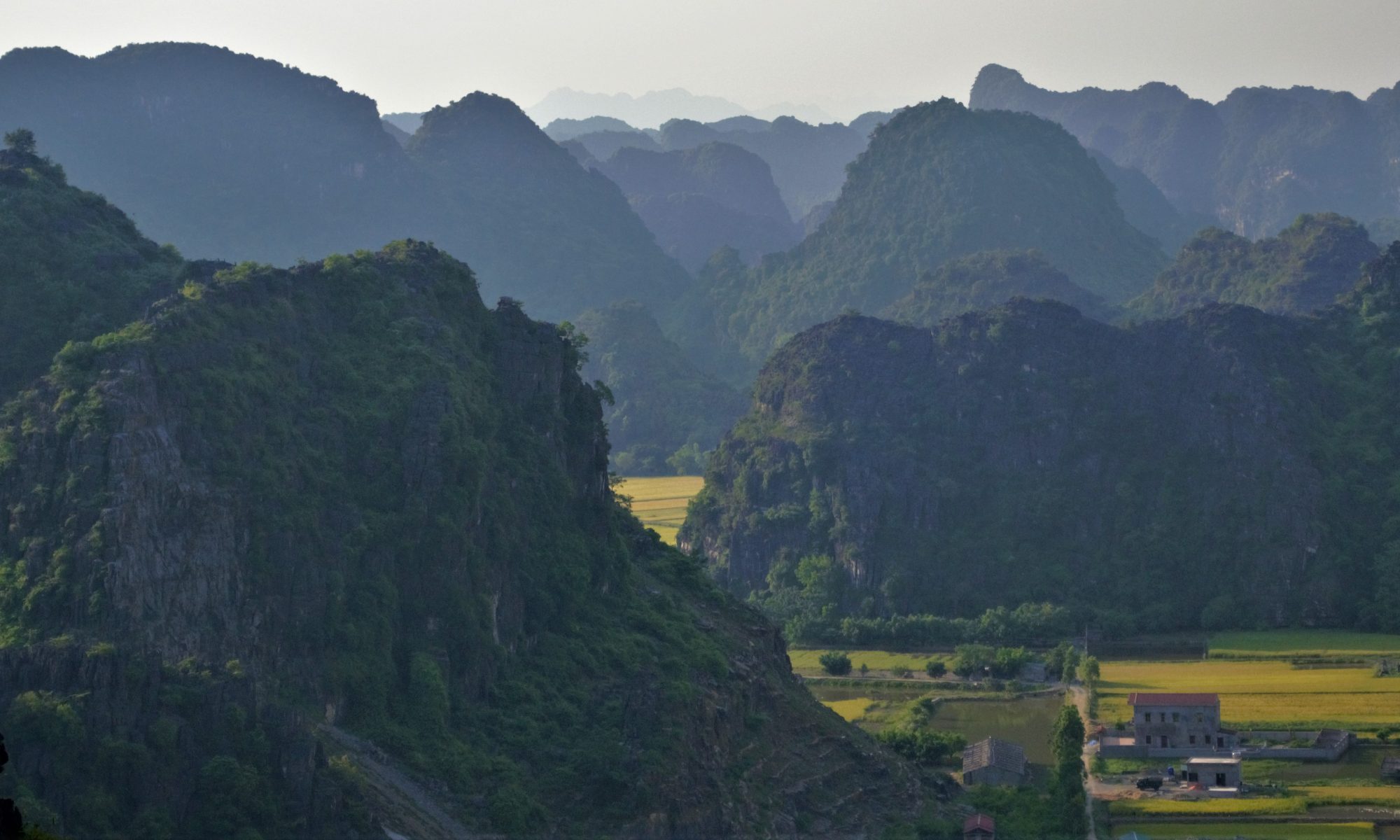 Our next destination would be the tiny village of Tam Coc, situated just a few hours south of Hanoi. This area is often talked about among travellers as “Ha Long Bay without the water” because of the karst limestone outcrops which surround the town.

We jumped aboard a train headed for nearby Ninh Binh and were soon in a taxi on our way to our hostel. We were staying at a place called Ham Rong Homestay, which was perfectly nestled among some of these impressive formations and was constructed entirely from bamboo.

Thoroughly happy with our base of operations for the next few days, we had a relaxed first night in order to maximise our exploration time the following morning.
After indulging in a great breakfast, we rented a moped and set a course for Trang An, a network of waterways that weave their way through caves and around some of the more picturesque parts of the local landscape. After paying the entrance fee, we walked around to a waiting boat which contained a tiny old lady whose job it would be to row us around for the next 90 minutes.

The scenery around here was unbelievable, each time we emerged from a cave we were greeted with yet another jaw-dropping vista. It was so beautiful that soon, the guilt of being rowed about by a woman old enough to be my nan had dissipated completely.

Back ashore, we went to get a drink and have a sit down in the visitors centre before getting back on the bike for our next stint. If we wanted a relaxing break though, it wasn’t to be. We had noticed earlier that we were pretty much the only westerners at Trang An that day and this fact had not escaped the notice of the local visitors either.
One Vietnamese guy started a conversation with us and used this “in” to get us to take a photo with his family. This was seen by other groups of onlookers as proof that we were a) friendly and b) available for photo opportunities. Within a minute, a queue had formed and we were hosting our very own meet and greet with our grateful new fans. We felt like celebrities but without the money or sexual harassment accusations. It was weird.

Once the crowds had got their piece of us, we were finally alone. While many stars struggle with this part of fame, we couldn’t dwell on it as we were now long overdue for getting on the road to our next point of interest – Phat Diem Cathedral. I’d love to tell you all about how beautiful it was and how strange it seemed to see a Roman Catholic building in deepest Vietnam but sadly we got lost and never made it. What I can tell you though is that many roads in that area look remarkably similar and also, checking your location once every 20 minutes while pulled over at the side of the motorway is an inefficient way of reaching your destination.

Having spent the afternoon on an accidental tour of the Ninh Binh region, we returned to the hostel for a much needed break from riding. We still had one more place to visit though and, as the sun was setting, this was the perfect time to do it.

Our busy day would come to a close with a trek up to the temple at the top of Hang Mua, a towering peak offering iconic views of the entire region. Thankfully, it was an easy and short ride to get there and the approach through rice paddies helps to distract from the 500 steps that you need to climb to reach the viewpoint.

The ascent is tough and some of the steps are a stretch to say the least, but once you reach the top and the sweat stops stinging your eyes, the views are breath-taking.

After the exertion of reaching the top, our stomachs were now informing us that dinner time was fast approaching. We dutifully listened to the grumblings and made our way down and back to the bike for the trip into Tam Coc itself for what we assumed would be a quiet evening.

Once again though, things got kind of… weird.
First, we reached town and endeavoured to buy a bus ticket for the next day. Having agreed a time and paid our money, we wandered off down the road happy in the knowledge that we’d secured the next part of our journey. We were stopped short however, as the woman who had just sold us said ticket was now chasing us down the road. Apparently there were no seats left so she’d have to give us a refund. Back to square one.

Slightly deflated we found a nice little restaurant and resolved to formulate a plan over dinner. We were shown in by a lovely man who handed us menus and sat us down, before promptly hopping on his bike and disappearing off up the road. He never returned and we sat alone and confused in the restaurant until a woman emerged from the back to tell us that they were too busy to serve us. We were the only people there.

Things got slightly better as we finally tracked down a restaurant that would… you know, give us food in exchange for money. Buoyed by this success, we then talked to another travel agency who said that they could get us a seat on a bus. This was all going rather too well.

Bellies full and excited to get on the road again, we ambled back to where we had parked the moped. It wasn’t there.
We were new in town and didn’t know the streets that well, so naturally assumed that we had made a mistake and carried on up the road sure that we would discover it. We walked and walked until we were nearly out of town. We hadn’t made a mistake, the moped was gone!

Panic quickly set in as the thought of losing our hefty deposit began to dawn on us. We simply couldn’t afford to replace an entire motorcycle.
In a last, desperate act we decided to each take a different side of the street and check every bike in the village. Unhopeful, we started our search. As we made our way down, it looked ever more likely that we’d have to fess up and admit defeat.

At the very end of the road, just as our search was coming to a fruitless end, I noticed a small garage next to a hostel that had become a rudimentary bike park. It was nowhere near where we had parked and completely the other side of the street but it was worth a go. I had only gone in a couple of steps when the most beautiful site of our trip so far appeared – our moped was there!

Quite why someone had elected to move our bike, we may never know, but the relief was so great that we really didn’t care.  We quickly saddled up and rode back to the safety of the hostel.

The next day we checked out and headed to the tour agency. We would have to wait until 9 that night for our bus to Phong Nha so the day was spent relaxing in the restaurants and coffee shops of Tam Coc.
It was a nice break from the touring around and a good opportunity to do a bit of research on our next port of call.
Watch out for our next post, which will cover our trip to one of our favourite places so far – Phong Nha National Park

If you missed out on our trip to Ha Long Bay and want to find out what we got up to, you can read that post right here.

One Reply to “Tam Coc? – No, it’s just the way my trousers fold”