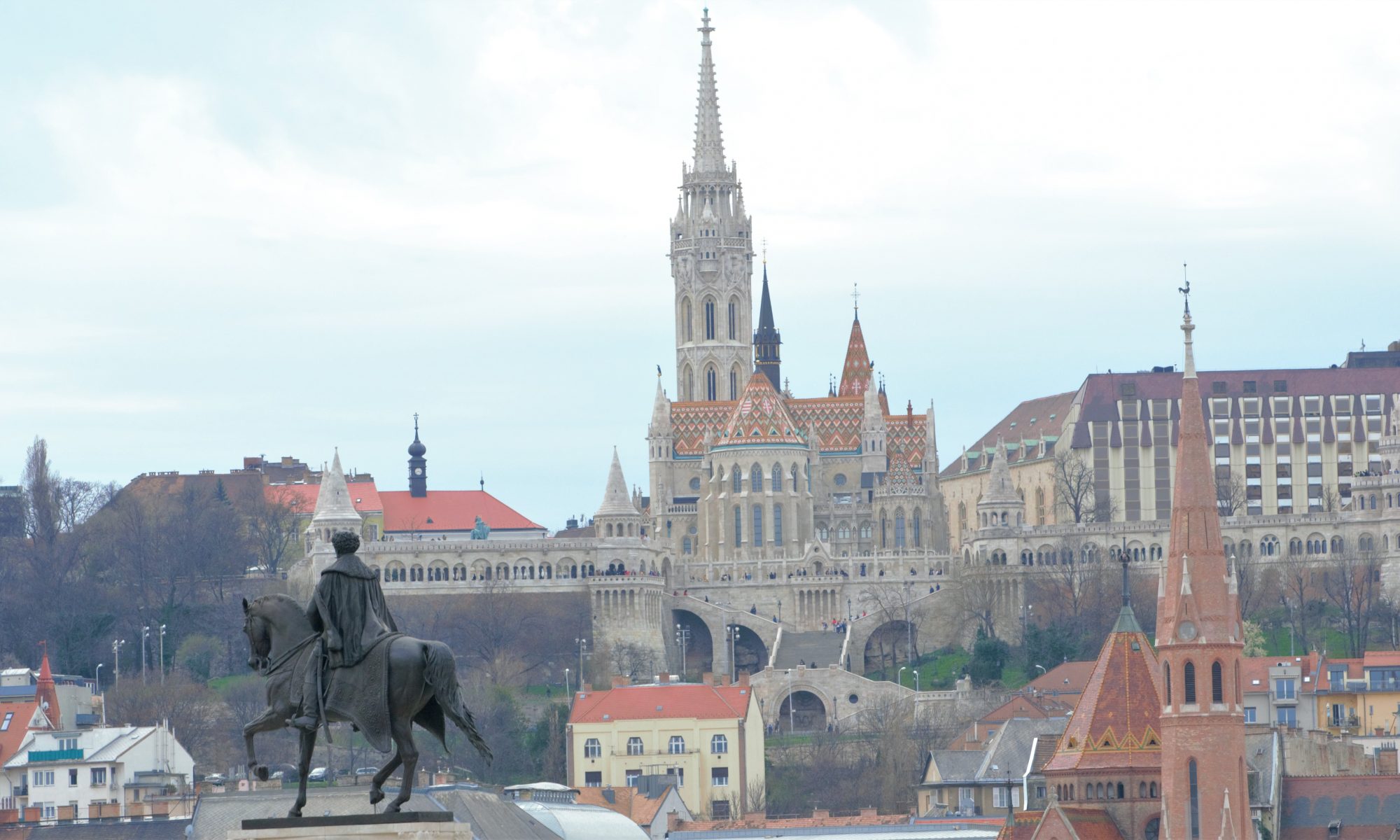 And so, our odyssey began with the first destination – Budapest, capital of Hungary and favoured location of British stag weekends since Blackpool got pricey.

After a short flight we landed at Budapest Airport and gathered our bags before heading out into the arrivals hall. Sticking to our resolution to keep costs down by using public transport wherever possible, we shunned the signs for taxis and shuttle buses and headed straight for the nearest bus stop before joyfully hopping onto the 100E heading into town.
The journey into town took around 40 minutes and we spent every minute of that, patting ourselves vigorously on the back for having taken the slightly riskier option and saving about £15 in the process.

The bus dropped us off at Deák Ferenc tér and we made our way down into the busy Metro station below. Once on the platform, you’d be forgiven for thinking you’d stepped back 40 years. The Metro of Budapest is low tech, with stations bedecked in wood and tile, but it works exceptionally well.
Getting on the train for the first time, the immense nature of our backpacks caused us the first of what is likely to be, many problems. The small carriages were not built for people with Volkswagen Beetles on their backs, and in these tight confines, our smallest movements became potentially fatal for our fellow passengers. Even the slightest of turns from either of us could easily have catapulted a nearby child through the carriage window and down onto the track below. We decided that we would have to be very careful about this. There is no better way to alienate yourself in a new country than to begin murdering their children, no matter how many times you say “Oops, sorry.”

Having navigated the Metro, we made the short walk to our very first hostel. Excited, we strode up to the front door and looked up at our new home. I hope that you can accurately imagine our faces as we gazed upon the scene below.

Yeah, that’s it. And this photo was taken in daylight! We arrived at night! And if you’re thinking “Oh well, maybe it looks better all lit up at night” – No, it looked like this, just in the dark.
Unperturbed, we went inside, checked in and entered our room. It wasn’t quite as bad as the entrance would have suggested. Yes, the beds were uncomfortable. Yes, it was just a small box with a door on the front but that’s kind of what you expect in a hostel.
The main thing for us was that, after a long day of travelling, we were there. Exhausted, we threw our bags to the floor and slumped onto the bed for a night of well deserved rest.

After a reasonably restful nights sleep we headed off into town for our first proper glimpse of Budapest itself. We had purchased 72-hour travel cards the night before but, as we wanted to get an understanding of the city, decided that we’d cover most of our ground that day on foot.

Initially we took a stroll along Andrassy Utca (utca = street), past the opera house and on to our first main port of call, St Stephen’s Basilica, a large Roman Catholic basilica named after the first king of Hungary. It’s a very impressive building especially when viewed from the large square at it’s front. It is possible to go inside for a small donation but we had a lot of ground to cover so we settled for a quick loop around it before moving on.

We then made our way through Vörösmarty tér (tér= square), which is home to some excellent food and craft stalls, and onto the banks of the Danube.
It’s a huge river which leaves you in no doubt as to why, for so long, the cities of Buda and Pest were completely separate.
Looking across at Buda Palace and the structures across the river, they look extremely imposing and we soon made our way across the Chain Bridge to have a look for ourselves. This was easier said than done, however.
As we paced along the bank toward the bridge, we were accosted nearly every step of the way by people selling various bus tours of Budapest. After the first couple, Cath’s patience was gone and each approaching smiley salesman knew instantly and in no uncertain terms, that we would not be getting on their bus today.

Once on the other side, we arrived at the foot of the funicular railway that leads up to the palace. After a quick bite to eat, we bought our tickets and sailed effortlessly up the steep hill to the palace itself.
At the top, we were afforded some stunning views across the river to Pest.

That isn’t to say that the palace itself isn’t impressive. There are many nooks and crannies to get into and we made sure to get ourselves into every one before heading north-east into Buda Old Town.

Exiting the palace, we made our way down the hill slightly towards the colourfully roofed Matthias Church and the beautifully intricate Fisherman’s Wharf, a fortified area which again, offers great views across the river.

Having seen all this, and in the process walked several hundred miles, we made our way down the hill and back to the hostel for a brief rest before heading off to the ruins bars.
The ruins bars of Budapest are a set of bars and clubs built into the abandoned and dilapidated buildings in the inner city area of Pest and they really are a site to behold. We spent the rest of our evening exploring, gawping at and drinking our way through some of the most famous of them before stumbling back to our hostel for what we assumed would be a good nights sleep.

Continue following us on our journey through Budapest in the next instalment coming very soon.