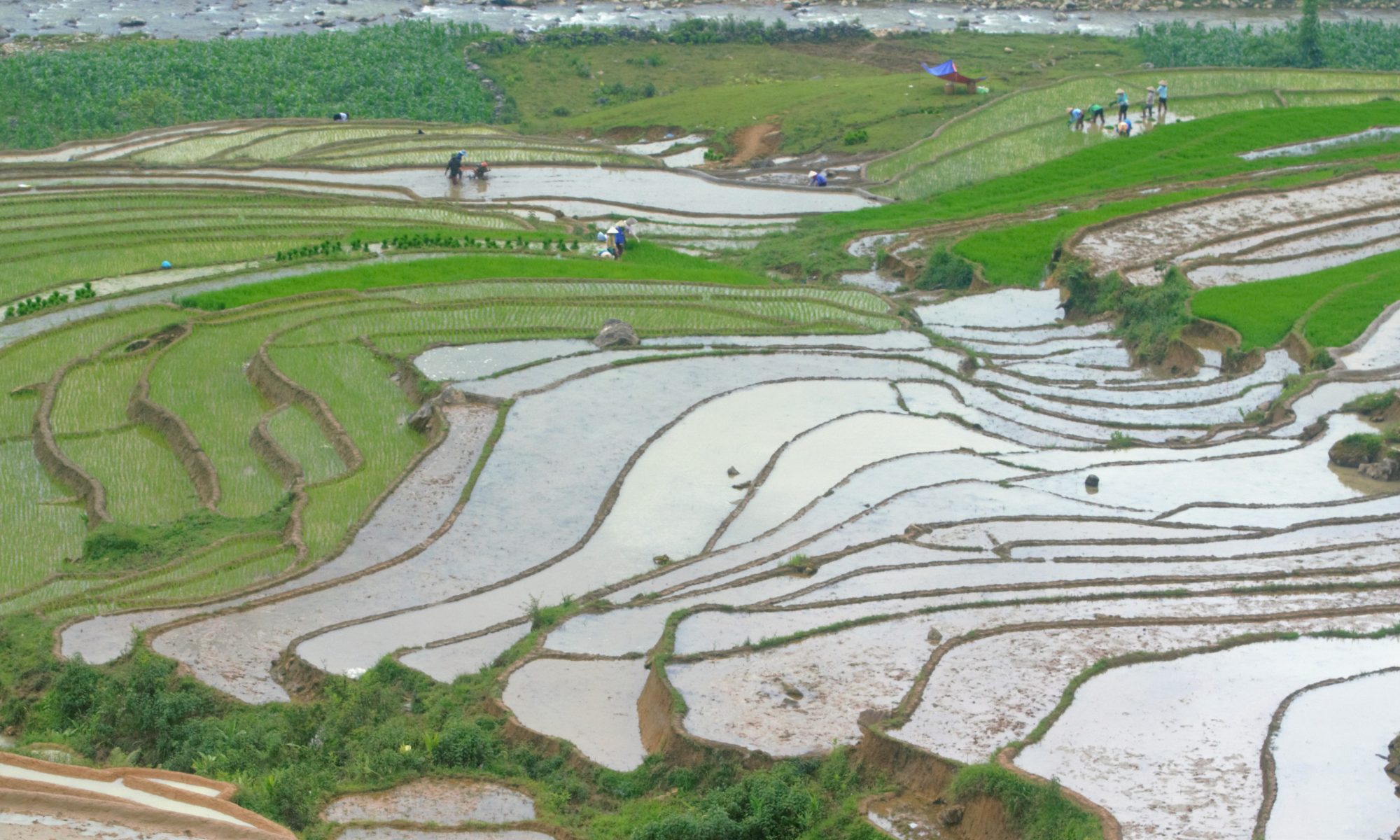 After scoffing down an early breakfast, we were collected by a mini-bus before being dropped off to our sleeper bus to Sapa. You’d have thought that we’d have had enough of sleeper buses after the last experience but, at a puny 6 hours, this was a relative blink of an eye. The journey was eased by the fact that much of the second half involved winding mountain roads which climbed up into clouds, looking down over the valleys below. It wasn’t long before the doors were opening into the northern city of Sapa.

Sapa is a small city built almost entirely around tourism and sits, nestled high up in the mountains of Hoang Lien Son, close to the border with China. It’s at such an altitude that they even get snow occasionally during the winter, not something that happens a lot in Vietnam. As soon as we got off the bus we were instantly accosted by crowds of women dressed in traditional garb imploring us to buy a bag or bracelet. This is a constant occurrence in Sapa, while we ate, several small children approached us holding their hands out for money and repeating “Medicine. Medicine.” as they stood. This was all the more heart-breaking as each of the girls, themselves no more than 8 years of age, had a tiny baby strapped to their backs.

Sapa was not our final destination though, that would be the tiny village of Tavan situated 11km into the mountains. Most people that come to this part of Vietnam are doing so to experience the village life of rice farmers that live on the steep slopes of the surrounding mountains and we were no different. We hailed a taxi and departed the city for the rice paddies.

The road out of town was terrible, especially once we hit the more rural areas. Giant potholes littered the surface and every vehicle travelled at a snails pace, swerving to avoid getting swallowed up by these cavernous voids. The 11km took about 35 minutes to drive and we were relieved to make it to Tavan in one piece.
We were staying at one of the local homestays in the village. This is where the local people open up a part of their home to visitors and you get to feel like you’re part of the family for a few days. The conditions are often not as good as your standard hostel but it’s a good way to meet locals and fellow travellers alike.

As we pulled up to the Chopai Homestay, we were afforded a warm welcome and then sat in the open-faced, front room for a welcome drink. As we sat drinking our tea, we noticed the there were swallows flying in and out of the room and looking up, even a couple of nests, each home to a small group of chicks.

As we were shown around by our host, Lo, he informed us that they are considered a lucky bird and that nests within homes are greeted as a sort of blessing.

After settling into our room, we decided to take a quick walk around town to get the lay of the land before heading back to the homestay for dinner. We stepped out into the dirt track that runs through the village and had walked about 10 metres before being joined by a group of young girls, all between 5 and 10 years old. They followed us as we walked, asking questions about where we were from and where we had been, all in perfect English.
As we walked, they picked flowers and leaves from the nearby plants and weaved them into impressive artworks, giving them all to Cath as a gift. It was a very cute moment.

Returning from our walk, we took a few minutes to get ready before we heard a shout from downstairs. “Pete, Cath, dinner’s ready!” – We couldn’t have felt more at home.
We climbed down the stairs and into the front room where some more of our fellow travellers had assembled for the ‘Family Dinner’. Nearly all of the homestays in Vietnam do these special dinners, during which the host (or more accurately, his wife) cooks for everyone staying there. Huge amounts of food are laid out as well as a huge bowl of rice wine, a powerful spirit made of fermented rice.

What we thought would be a quick bite to eat and a chat, turned into an evening long, rice wine marathon as we all got to know each other. By the end of the evening the whole group were singing on Lo’s karaoke machine and we finished with a midnight snack of Nutella and Pringles.

The next morning, after breakfast, we decided that we would take a walk out into the surrounding area to take in some of the views. We had heard talk of a waterfall and, not being ones to pass up the opportunity of seeing one of those, we wandered off to track it down.

As we reached the turn off from the village, we were followed up by a couple of local women and some kids who wanted to show us the way. Despite our saying on multiple occasions that we didn’t need any help, they followed along anyway and our group of two became five.

Once out of the village, it doesn’t take long for you to see why so many people rave about the place. The cloud-shrouded mountains that surround the river valley make for a stunning setting and the terraced rice paddies only add to the spectacle.

The path to the waterfall snaked it’s way along the side of the hills and passed alongside farmhouses giving us a breath-taking insight into the lives of those that live in this part of the world.

After 20 minutes or so, the heavens opened and it got very wet, very quickly. We were soon slipping and sliding on the mud as water cascaded down onto the path, turning it into a river in parts.
We were now very glad of our band of followers as they helped  us up and down the steeper parts of the walk. Despite being helped along by the two women, Cath still managed to land on her bum several times and ended up both bruised and covered in mud.

After an hour or so, we finally made it to the waterfall. It wasn’t the most impressive one that we’ve ever seen but the walk there was out of this world, even if we did get drenched.

We took a slightly less exciting route back, winding our way to Tavan via a road on the other side of the valley. We arrived back at the homestay completely wet through much to the amusement of Lo and the rest of our temporary housemates.
That afternoon was all about drying off and there was no better way to do it than making use of the hammocks up on the balcony. We spent the rest of the day relaxing and looking out over the hills.

Our short lived time in Tavan came to an end the next day and we got a taxi back to Sapa, ready for the afternoon bus back into Hanoi. We just had time for a quick lunch in town before we were on the road again.

We arrived back at around 9pm and were dropped off a short walk from our hostel. Arriving back, we were greeted by the smiling face of the receptionist as he welcomed us back from our travels. Encouraged by his cheery demeanour, Cath asked for her passport which had been sent off for a Visa extension and was now long overdue.
The smile disappeared from the guy’s face and was replaced by an awkward and uncomfortable grimace. The passport was still not back. We were due to go to Halong Bay the next day before returning to Hanoi one final time prior to heading south down Vietnam. The receptionist promised that the passport would definitely be back by the time we were back from Halong.

Unconvinced and fearing the worst, we asked him to make sure that it was before heading up to bed. We had another early start the next day, the bus for Halong Bay would be picking us up at 7am.

Will Cath ever get her passport back? Is Halong Bay as good as everyone says? All these questions answered in the next blog post!

P.S – If you missed out on our last post and our first visit to Hanoi, you can find it here.