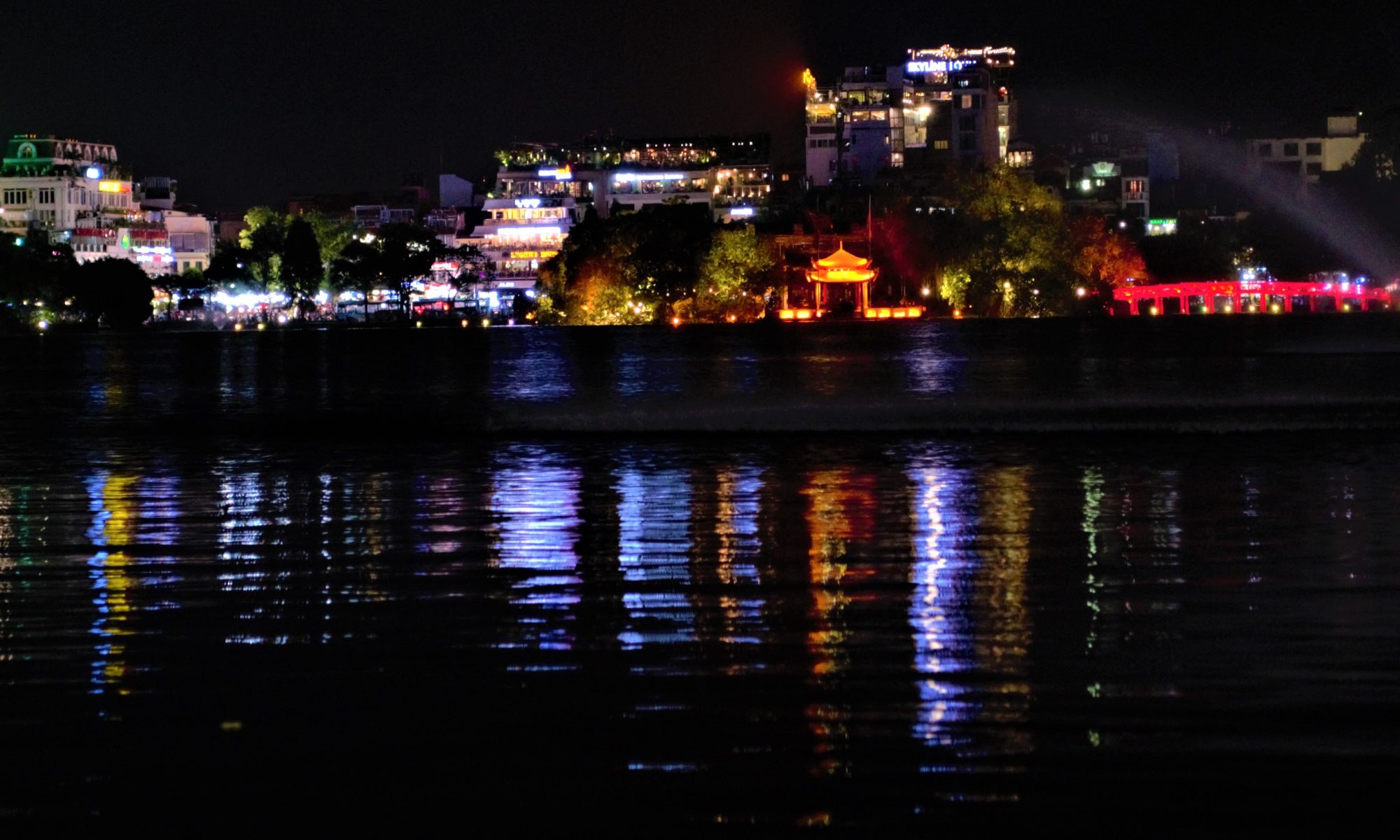 And so, after the bus journey to end all bus journeys, we had finally reached our first destination in Vietnam – Hanoi. After pulling into the bus station, we instantly hopped into a taxi and were on our way to our hostel. As the taxi pulled out and we entered the whirling sea of traffic, you are hit by one over-riding thought – “Shit! That’s a lot of bikes!”.

It’s impossible to communicate in writing just how many mopeds there are on the roads of Hanoi. It’s incredible. There are more mopeds than people. Sometimes the moped is riding a moped. If all the grains of sand on an infinite beach were mopeds, you’d have the same number of mopeds that you’d find at a single set of traffic lights in Hanoi.

All these bikes leads to a remarkably fluid traffic situation. Lanes cease to have meaning and road laws are abandoned as scooters jostle for position with remarkable accuracy. There are traffic lights and roundabouts but when red means go, what’s the point?

Our driver picked his way through this maze of sputtering death traps with consummate ease and we were soon parked up outside the hostel and dropping off our bags to our very comfortable room. Normally, after such a long bus journey, we’d have gone straight to bed for a few hours but, excited by our arrival and animated by hunger, we were straight out into the city. This meant that we had to take part in a severely risky activity – crossing the road in Hanoi.

We had been warned by multiple travellers that this is something that takes a while to get used to but still we were surprised at just how different it is. You cannot wait for a gap in traffic because one will never appear. Anyone adhering to the ‘Green Cross Code’ would stand perpetually at the roadside, trapped in an eternal cycle of looking left and right until their body withered and died and they collapsed patiently onto the kerb. The steps for crossing here are as follows: 1- Go!, 2- Don’t stop! The constant flow of vehicles move at a relatively slow speed and so, the only way to force your way through is to abandon all that you have learned about road safety and leap out in front of the moving traffic.

The beauty of the fact that nearly all of the things that are about to hit you are on two wheels, is that they are very manuveurable and they can zip around you with ease so long as you move in a consistent manner. It takes some getting used to, but once you get your eye in, it works amazingly well and you’re soon diving into the path of everything with an engine.

That night, after getting food we took a walk around Hoan Kiem Lake and took in the Red Bridge that reaches out to an island at its centre. On the walk round the lake we found a thriving nightlife of dance groups, exercise classes and barbeques sandwiched between the calm of the water and the mania of the city. Something about watching an old Vietnamese lady learning to salsa dance in a park with the hum of the city in the background is very endearing. We were already starting to love Hanoi.

The next day we planned to hit all the major landmarks of the city but first, we had to take care of some business. Those of you that read the last installment of this blog will know about Cath’s Visa delay. The upshot of this mix up was that, while I had leave to remain in Vietnam for an ample 28 days, Cath could only stay for 14. This was something that needed correcting as soon as possible. Fortunately, the reception at our hostel advertised a Visa extension service and we set about fixing the problem. They said that for a fee of $30, they would take the passport and get the Visa extended by the time we got back that evening. We were also able to book trips to Sapa and Halong Bay at the same time giving us a great head-start on our planning. We would get on a bus bound for Sapa the very next morning.

Feeling reassured, Cath handed over the passport and the cash and we cast out to get our first daytime look at Hanoi.
First up, we caught the bus to Lotte Tower, a huge skyscraper a few km out of Old Town which had a viewing platform offering outstanding views of the city. We found it with ease, thanks to the help of the bus conductor, and after an ear-popping ride in the elevator, were soon looking out over the bustling streets.

As you can see, the views really were great but we had a lot more ground to cover and so after a quick coffee we headed back down and were soon back on the bus. This time we were heading for the heart of the city and the area surrounding the Mausoleum of Ho Chi Minh. Firstly, we stopped off at the One Pillar Pagoda, so called because it sits atop a single thick pillar at the centre of a small lake.

Next up was the mausoleum itself, which was unfortunately closed at the time of our visit. This didn’t upset us too much as it’s very likely that he’ll still be dead by the time we eventually return to Hanoi on any future trip. The building itself is the most impressive bit anyway and we got a great view of that from the neighbouring Ba Dinh Square.

We had a quick glance through the gates at the Grand Palace and toured around the parliament building on our way to to one of Hanoi’s main sights, the Thang Long Imperial Citadel. Originally built in 1010(!), this network of gates and palaces was the home of the royal Vietnamese courts for 800 years and also housed a secret military facility used by Northern Vietnam during the wars with France and the US.

We wandered around here for an hour or so before we stumbled across something you don’t really expect to find in the remnants of an ancient city, a smurf museum! Jammed right in the centre of the historical site, between the War Bunker and the remains of Kinh Thien Palace was an entire building dedicated to little blue cartoon characters. It made no sense and nothing gave any clue as to what it was doing there but we enjoyed it all the same.

Our last stop at the end of a busy day was to the infamous Hoa Lo Prison, better known as the ‘Hanoi Hilton’. The prison was built in the late 1880’s by the French during their colonial occupation in order to hold Vietnamese freedom fighters. The prison is now, in part, a memorial to those fighters who died and suffered to free Vietnam.

It was an eye-opening window into the history of the country and the brutality of the colonial powers of the time. The prison was also used to house captured American pilots during the Vietnam War and had some fascinating exhibits which showed a very different version of the conditions faced by prisoners of war than those we had been shown by western media.

Having seen as many of the major attractions as we could cram into a day, we returned to the hostel to get cleaned up and collect Cath’s passport. Upon our arrival however, we were informed that the passport would take a bit longer but that it would definitely be back by the time we got back from Sapa. (Some of you will perhaps identify an element of foreshadowing in that last sentence).
Feeling slightly less reassured, we went out for a dinner of tasty Pho (a vietnamese noodle soup) and a nighttime walk around the tight streets of Old Town before meandering our way back to the hostel to prepare for our bus to Sapa which was due to depart early the next day.

One Reply to “Hanoi-ingly good”