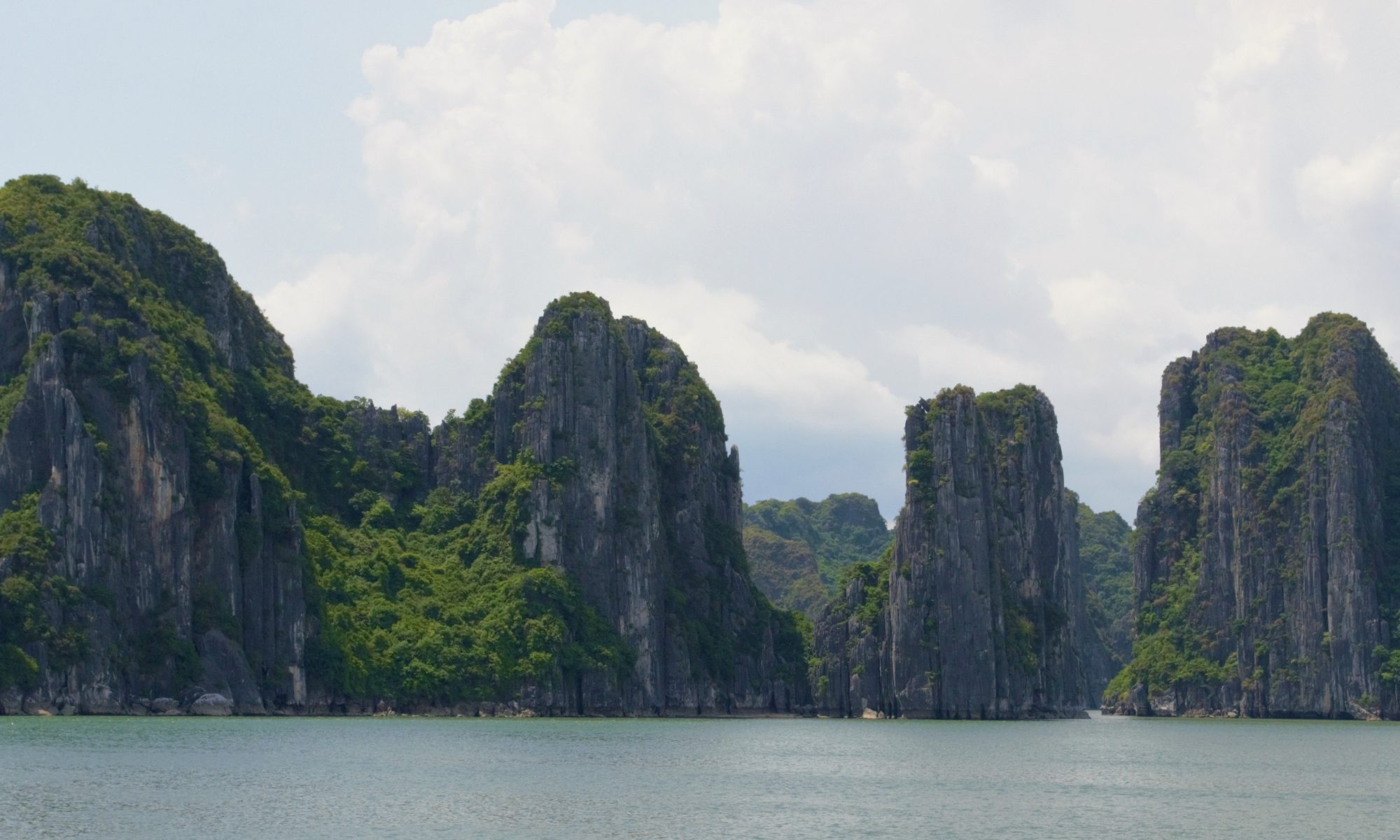 The bus picked us up bright and early the next day after another hurried breakfast and even more hurried packing session. This time we were heading for Ha Long Bay, a good three hours drive out of Hanoi and one of the most Instagram-ed locations in the world.“Ha Long” means “descending dragon” and the bay is the site of a mythical battle with the Chinese, during which dragons came down from the sky to protect the local Vietnamese people. The bay is home to around 2,000 islands, all formed of limestone (little bits of ancient sea creatures), that jut out of the sea in a myriad of unlikely and beautiful ways.  For the next 24 hours, we would be cruising through these islands on a boat, occasionally stopping off to explore along the way.

We arrived at the dock and were soon ferried over to the embarrassingly named ‘Fantasea’ cruise vessel, which would be our home for the night. No sooner were we aboard than the attentive staff started to bring out lunch and our little boat started to chug it’s way out to the islands.
After a frankly unhealthy amount of food, we wobbled up to the top deck and took in our surroundings.

It is a truly unique place and you’re instantly struck by the thought that you’re somewhere quite alien. The islands look impossible, with arches and columns that don’t look as though they could withstand a high wind, let alone millions of years of rough seas. We were all captivated.

We seemed to arrive at our first destination in minutes, as we were all called downstairs to prepare to be set ashore. This initial drop-off would be at ‘Surprise Cave’. The place is called ‘Surprise Cave’, partly because no one noticed it was there for a very long time, and partly because it’s vastly bigger than it looks from the outside.

We climbed up the stairs into the first chamber and, sure enough, were surprised by it’s size. Then we walked into the second chamber! Jesus!!
This thing was ridiculous, it seemed like it was bigger than the piece of rock that housed it. Like some geological Tardis, it just carried on and on in every direction.

Having all agreed that the cave had more than lived up to it’s name, we exited via a second staircase and made our way to the waters edge to get back on the boat.
Our next port of call would be to a small jetty floating among a few of the islands, which was where we would board our kayaks. They were all tandems, so me and Cath jumped in the nearest one and, along with our shipmates, cast off into the waves.The only instruction we were given before we set off was to avoid the cave as it was only for people on other, more expensive boats.
Ignoring that advice, we hot-footed it over to the cave and dragged our kayaks up onto the small beach that lay at its opening. Having climbed up inside, we managed to explore it for a further 20 minutes or so before a very shouty man arrived to inform us that we had to leave.

Booted out of the cave we set a course for the only other location of note that we could see, a small strip of sand about 300 meters away. After struggling against the current, we finally managed to reach the beach just in time for our guide to wave us back to the boat.
Tired and without the faintest idea of how to properly steer a kayak, our little flotilla zig-zagged it’s way across the water, occasionally bumping into each other until we crashed indelicately into the jetty.

We were soon back on the boat and had just enough time for a quick shower before we were called for dinner. Once again, plate after plate of food was brought out until we just couldn’t eat anymore and we were released for the evening.

The evening’s entertainment consisted of a valiant effort to drink the entirety of the contents of the bar. This was followed by numerous games of cards which became progressively less slick through the night and the unexpected success story – Squid Fishing!
The staff had lent two rods up against the back of the boat (there’s probably a proper name for that..) and turned on a blindingly bright light which they shone onto the water. Squid, it seems, are the moths of the sea. Show them a light and they will hurl themselves towards it, no matter how many of their inky brethren they see skewered by a hook and jerked from the sea.

Cath couldn’t wait to have a go at this and was soon hanging, rod in hand, over the side of the boat. Stupid as squid may be, they are exceptionally quick, and hooking one is no easy task. The game of Cat(h) and mouse continued for ten minutes or so before suddenly, their was a squeal of excitement. She’d got one and was lifting it up and onto the boat when, in a final act of defiance, the squid let fly its ink all over Cath’s face. The battle was over though and below you can see the spoils of war.

The excitement of the hunt was all too much and we retired to our cabin for a night among the karst cliffs of Ha Long.

The next day, after being stuffed with a gargantuan breakfast, we had our last activity before starting the journey back to shore.
We stopped of at an island which had a good lookout point, as well as a beach with a swimming area. I’m sure both of these things would have been lovely were it not for the incessant rain that had arrived over-night. The clouds hampered the view and dampened the swimming (?) such that we were soon seeking the shelter of the boat.

It was now time to turn for home and our little cruiser chugged it’s way back to harbour flanked by a huge number of similar vessels. The sheer number of tourists there means that you’re never far away from another ship but now that you could see them all it really hit home.
Our guide told us that over-night boats would be banned from the bay in the next 5 years in order to try and contain the problem, so it seem that we got there just in time.

After a short wait in the harbour we boarded the bus back to Hanoi and our thoughts turned to Cath’s passport which was still away getting a visa extension.
We would depart to Tam Coc on the train the next morning so it was more vital than ever that it be back and ready for us to collect. Hopeful after the promises of our host, we bounded into reception eagerly anticipating the smiling face of someone who had a passport to return.

We could instantly tell that it was bad news. The receptionist squirmed uncomfortable when he saw us and then launched into a pretend search for the document when we asked him about it. Finally he had to come clean, he didn’t have it.
The worry was now manifesting itself as anger and we explained as calmly as we could, that we would not be back after tomorrow and needed it back now. He said that he would see what he could do and we went out for dinner fully of the opinion that the passport had been lost. As we ate, we discussed our next moves and how we could get a replacement in the short time that we had.

We returned to the hotel ready to have it out with the manager and angrily burst through the door. This time, the receptionist greeted us with a big smile and held one hand aloft, waving at us a shiny purple passport. We almost ran over to his desk and sure enough, it was true. Cath had her passport back!

The relief was palpable and all the anger dissipated immediately. Cath’s visa was now fully extended and we could set off the next morning ready for the rest of our adventure in Vietnam.

If you missed our trip to Sapa, you can catch up with everything here.