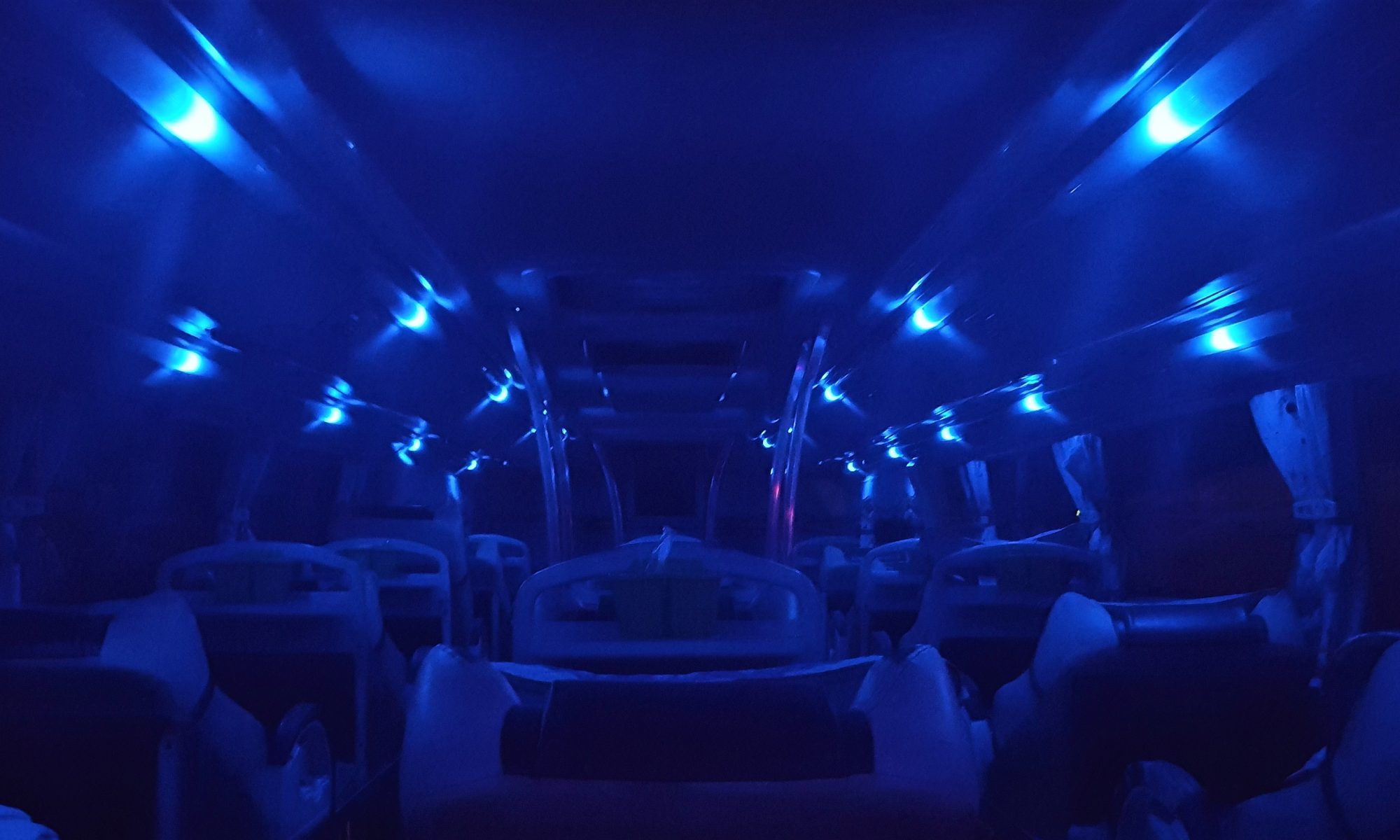 After an exciting week, our journey in Laos had come to an end and it was now time for us to head off for Hanoi in Vietnam. In carrying out the research into just how we would go about covering the 477km that sits between the two, one thing jumped out and was repeated again and again, DO NOT take the sleeper bus.

Sadly for us the sleeper bus, a journey of 24 hours and covering over 750km, was our only option. Flying was going to be far too expensive and, with no train line between the two countries, even our trusty sleeper train was out of the question. We were left then, with the fabled sleeper bus.

Having booked our tickets on the internet, we had dutifully printed them out and arrived at Vientiane North Bus Station an hour before departure as advised.
Armed with all the relevant information, we strode up to the ticket office and handed over the tickets to the angry looking woman behind the counter. She glanced at them for a moment before immediately tearing them to pieces. All our details for the trip – our booking reference, proof of payment, departure time – were all on those tickets and she had eviscerated them before our very eyes. As we stood there stunned, she scribbled down something on a blank piece of paper and handed it to us, pointing for us to get out of her sight.
We walked away and looked down at the piece of paper, it said “29B 105A”.

We had absolutely no idea what this meant.

Confused, we walked out into the busy bus stand where about 15 buses were being fussed over by, I’d say 100 people, all of whom seemed to work at the bus station in some form or other. We wandered over to the first bus that we saw and were heartened to see that it was going to Hanoi. We eagerly showed our ticket to the man standing next to the bus and, after looking at us as though we’d just shat in his noodles, he told us to go away.

This scene was repeated multiple times as we made our way from bus to bus when finally, the last guy augmented his assertions that we should leave by telling us to go to stand 1, the very first place we had been. Returning to the first guy, this time we ignored the protestations and assured him that this was our bus. He had another look at our piece of paper, sighed and rolled his eyes before finally relenting and accepting us as his passengers. He snatched our backpacks and launched them into the luggage compartment with all the violence he could muster before telling us to sit and wait.

Here we sat for a very long time, the time that our bus was due to depart came and went with no indication that our bus would ever leave the station. Finally, about an hour after we were due to have set off, a shabbily dressed old man shambled up to the door of our bus holding what appeared to be a glass of whisky. This, as it would turn out, was our driver.

He got on and sorted through some papers, when all of a sudden he started the engine. There was no one on his bus but he seemed fully intent on leaving before we jumped up from our bench and started hammering on the door. He opened it reluctantly and we boarded, shoving the piece of paper under his nose as we did so. Desperate that we not be on his bus, he called another person over and after a short but heated discussion he pointed for us to go to the back of the empty bus.
We asked if we could sit anywhere but he was insistent that we sit nowhere else but the very back, directly next to the toilet. After a few minutes another (Vietnamese) man got on, was told he could pick any seat he liked and suddenly we were moving.

This was disconcerting because every single thing that we’d read about this sleeper bus journey told us that we’d be squeezed in like sardines and would most likely be forced to sit on the floor and here we were departing with only three passengers. Despite this apparent space, we were once again told that we should not even think of moving from our seats at the back. (During this and future bus journeys we were to learn that no one wants to sit at the back of these buses as you get, not only the smell from the toilet, but also a severe buffeting from the pot-holed roads. We’d been shoved here as some kind of punishment for being western.)

A few more people boarded as we drove, but we were never at more than half capacity. As the miles ticked by, we realised that we’d gotten remarkably lucky. Two other buses had left on the same route as us at the same time and they were filled to the rafters. Somehow, even though no one wanted us, we had ended up on the best bus possible.

A few hours down the road we pulled up for a rest stop at the shadiest service station you have ever seen. As our convoy of buses pulled up, the place leapt into life and frantic cooking began. It was hard to discern exactly what we supposed to do but eventually we worked out that we should go to the till and buy a token. We were then able to exchange this token for food, each of us given a large tray containing some rice and a big dollop of chicken bones. At first it looked as though there might be some meat hanging onto these jagged clumps but the first bite told us otherwise. We sucked our bones, gobbled up our rice and were soon back on the bus.

The next couple of hours went by quickly with patches of sleep interspersed with being unceremoniously launched out of our seats by large pot holes.
By 2am we had reached the border with Vietnam, which is a curious scheduling decision given that the border doesn’t actually open until 7am. We passed the night in relatively undisturbed slumber as our bus sat among hundreds of others all waiting for the morning’s proceedings to begin.

At 6:30, we were suddenly awakened by shouting from the front of the bus. It was our driver’s assistant telling us we had to get off, not everyone of course, but just us. We exited the doors to see that all the westerners on the other buses had been dumped out onto the road as well.
In another nod to fostering international relations, all south-east Asian passengers are able to pass through the border in the comfort of their beds with the bus staff handling all passport related activities. Any non-Asians are forced to handle their own exit out of Laos, then made to walk the kilometre through no-mans land to the Vietnamese side and then negotiate their way into Vietnam before meeting up with the bus on the other side of the border.

Armed with absolutely zero information on the procedure, even getting out of Laos was an ordeal. Firstly, after a nights sleep and having removed her contact lenses, Cath had been rendered completely blind meaning that I was required to lead her round like a guide dog. Then came the immigration office itself which was utter pandemonium. The officials seated in the office process the bundles of passports based on who gave them the largest bribe. Every one of the bus driver’s assistants were jostling at the window, while the westerners looked on unsure of what to do. It soon became clear that in order to get through the border today, we were going to have to elbow our way to the front of the crowd, throw our passports through the window and fight to get them seen to.

After half an hour in which these guys must have collected hundreds of thousands of Laotian Kip, we were finally able to get our stamps and enter no man’s land. We made the lonely walk with the other westerners and several stray dogs as our buses, complete with the smiling faces of our fellow, Asian passengers, whizzed by.
Now it was time for the Vietnamese entrance, which should have been fairly simple but for the fact that one of us was without their Visa. Even though we had applied at exactly the same time, my Visa had arrived promptly a few days before, whereas Caths was nowhere to be seen. Thankfully, this didn’t cause too much of a problem and we were given our stamps in exchange for another bribe of just a few dollars.

We exited the Vietnamese immigration to find that our bags had been dumped in the road so that we could take them through the security check ourselves. This we did and after another few checkpoints we were reunited with our bus and officially in Vietnam.
We got back onto the bus absolutely exhausted from all of the to-ing and fro-ing and were thankful to be back in our seats. We now only had 8 hours on the bus until our arrival in Hanoi.

These 8 hours passed without much incident. We made a food stop at a place where a woman shouted constantly into a microphone. We got our first look at Vietnam through the shaded windows of the bus. We were even invited to come down from our position by the toilet and sit in one of the many other empty seats for the last half an hour of the ride. An action which seemed like a slap in the face having spent the previous 23 hours staring at these same seats through a thick haze of eau de shit.

After all that time, we were arriving into Hanoi and we couldn’t be more pleased. Looking back, we definitely feel that we had the best possible version of what was still a pretty crappy experience. Other travellers we’ve met have been through the same thing but were crammed into a tiny space, pushed up against someone that they didn’t know or worse still made to occupy the floor while feet, wet from the toilet, stepped over them in the night.
It wasn’t nice, it wasn’t fun but it was cheap, we had our own space and it was an experience. Best of all though, it was over.